What's up in Sweden?

Not good news coming out of Sweden. The PM has stepped down after losing to a coalition of right wing parties.

Sweden's prime minister says she will stand down after her government was defeated in Sunday's election.

Magdalena Andersson's centre-left coalition looks set to narrowly lose to a bloc of right-wing parties, 176 seats to 173, with 99% of the votes counted.

The bloc includes the Sweden Democrats, a far-right party that has campaigned against rising gang shootings.

The final result is still to be confirmed after a recount, which is standard practice in Sweden.

But despite this, Ms Andersson accepted defeat at a news conference on Wednesday, and said she would officially resign on Thursday.

"In parliament, they have a one or two seat advantage," she said. "It's a thin majority, but it is a majority."

The close-fought election campaign was dominated by gangs, immigration and integration issues, as well as soaring electricity prices.

Ms Andersson was the Nordic nation's first female PM when she took office last year - she quit on the first day, before returning soon after.

She has been edged out by a four-party right-wing block made up of the Sweden Democrats, Moderate Party, Christian Democrats and Liberals.

It is a momentous turning point for Swedish politics - the Sweden Democrats was once treated as a pariah by political parties, but has now won around 20% of the vote.

It vowed to "make Sweden safe again" by bringing in longer prison sentences and restricting immigration.

However the party's leader Jimmie Akersson will not become prime minister, the BBC's Maddy Savage reports from Stockholm, because he does not have the full support of all four parties.

Instead, Ulf Kristersson, leader of the Moderates has said he will start to form a government.

"I am ready to do all I can to form a new, stable and vigorous government for the whole of Sweden and all its citizens," Mr Kristersson said on Wednesday.

The Sweden Democrats party was born out of a neo-Nazi movement at the end of the 1980s, but has slowly grown stronger while attempting to polish its image.

In 2019 Mr Kristersson started talks with the party to form an alliance - a move which has now changed Sweden's political landscape.

Ms Andersson told reporters on Wednesday that she understood those concerned at the party's growing popularity. "I see your concern and I share it," she said.

Magdalena Andersson's Social Democrats had governed Sweden since 2014 and dominated the country's political landscape since the 1930s.

Sunday's vote was one of the closest elections ever in Sweden, with thousands of overseas and postal votes needed to be counted to get a clearer picture of who the winner was.

This is a huge blow to the Social Democrats who gained votes compared to the last election, and remain Sweden's largest party.

But here it's bloc politics that usually decides who gets into power and the right bloc has scored a razor-thin majority.

Magdalena Andersson told reporters she had to respect the Swedish people and Swedish democracy.

Now it's up to the right to try and form a coalition.

A: Because the pace of technological and societal change is too fast for them to handle.

A: Because the pace of technological and societal change is too fast for them to handle.

That's one way to describe it.

"The essence of the Sweden Democrats’ vision is ethnonationalist and conservative, Professor Hinnfors said. 'They want harmony in society by having everyone with their loyalty to Sweden,' he noted, adding that the party viewed multiculturalism as the root of many problems in Sweden.

"Other analysts said that they expected the party to focus on immigration, education and spending, including limiting financing for public services.

" 'It’s about traditions, cultural heritage, values and the idea that there is a Swedish culture that is tied to Swedish identity and that must be protected and be preserved against other cultures,' said Linnea Lindskold, director for the Center of Cultural Policy Research at the University of Boras, in southern Sweden. Unlike other parties, she said, the Sweden Democrats wanted to have a hand in defining what cultural expressions and art were acceptable."

Yes, of course, but it’s the fact that societies are no longer accepting that racism that is driving the current rise of fascism.

Thank you for starting this thread. I was quite alarmed when I first saw the results, and there’s no-one here with whom I can discuss politics (marksierra is too far away, and my brother works in a sensitive industry).  Everyone here is too focused on the UK and what it means for us.
I’m hoping to learn to from your thoughts, and also your reactions to events in Italy. It’s just too far right for Italy, it’s scary and I suspect it will stop the progress within the Catholic Church. But Sweden? This just doesn’t vibe with Scandi ethos, that I grew up knowing about. There’s some very deep-level societal discomfort now I’m not fully understanding.

Surprising many in Stockholm, the Sweden Democrats, a party with neo-Nazi roots and a fierce anti-immigrant, law and order stance, won second place in last week’s national election, backed by one in five voters. Its support will be crucial for the new centre-right coalition aiming to replace the Social Democrats. If the fact that such a party, skewered by opponents as neo-fascist brown shirts, will play kingmaker is not alarming enough, then consider this: in the land of Greta Thunberg’s birth, 22% of first-time voters aged 18 to 21 voted for the Sweden Democrats, a party that shares the European far right’s scepticism about the climate crisis.

Worries about cost of living and energy crises, the war in Ukraine, immigration and gun crime – a hot-button issue in Sweden – may help explain this phenomenon. And they are not confined to Swedes. Such issues easily translate to Italy, where like-minded far-right parties are poised to win power next weekend.

This is somewhat to be expected from a nation too focused on meatballs and stores selling unfinished furniture.

Matteo Salvini, the leader of Italy’s far-right League, has promised that his alliance with Giorgia Meloni’s Brothers of Italy will deliver a long-lasting government, as Italians begin to digest the outcome of an election that will bring about the country’s most rightwing government since the end of the second world war.

Final results gave the coalition control of both houses of parliament with 44% of the vote and confirmed a swing in the balance of power in the Italian far right towards Meloni as her party made spectacular gains in the League’s northern strongholds of Veneto and Friuli Venezia Giulia.

Meloni is expected to be given a mandate from the president, Sergio Mattarella, to form a government after 13 October, meaning she could take office by the end of next month.

She's more than a fascist. She's kind of a nutcase.

Mother Jones going hard on the amount of times you can throw Tolkien in a link.

This is somewhat to be expected from a nation too focused on meatballs and stores selling unfinished furniture.

I blame the meatballs.

Okay, so maybe it’s not the meatballs.

She's more than a fascist. She's kind of a nutcase.

They think they’re hobbits, but they’re really more like orcs.

First they recast the queen as a dude, now this. 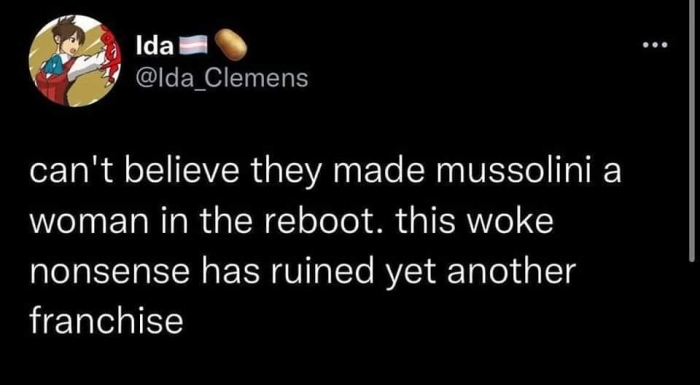