Meet the Mets (For Mets Fans Only!) 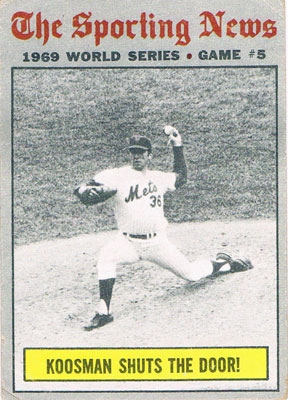 The Mets of my youth....
I wonder how many of Koosman's loses were by one run, 3-2 or 2-1?
He generally was their hard-luck pitcher back then.

Jun 9, 2012 at 12:21pm
Back to back to back. Oh well. Let's see how they do tonight against the team who certainly lived up to their Bombers name last night.

R.A. Dickey is in the most dominant stretch any Mets pitcher has had since Doc Gooden 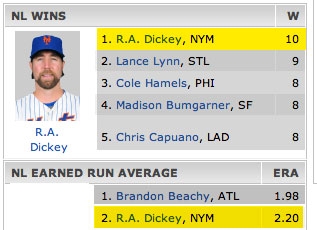 Jun 14, 2012 at 3:02pm
it's weird what they show to fill time on cable sports networks. for the past 3 days on SNY, I've been watching Mets batting practice.

it's weird what they show to fill time on cable sports networks. for the past 3 days on SNY, I've been watching Mets batting practice.

I needed my son to explain what my appropriate reaction to your post should be:

Jun 16, 2012 at 7:03am
So, the bad news this week is Jason Bay is suffering from another concussion. Good news is Kirk Nieuwenhuis and Scott Hairston are guaranteed more playing time.

Jun 16, 2012 at 7:05am
Jason Bay ranks up there as an all-time Mets free agent bust. he's still got a couple years left on the contract to turn it around, but he's been a zero so far. in his defense though, he's injured himself giving all out effort in the outfield. without all the injuries, who knows how he might have performed?

Jun 16, 2012 at 9:43am
I wish he had let some of those balls drop instead of crashing his head and body into a wall over and over again.

Jun 17, 2012 at 1:40pm
Thank you Yankees for sweeping the Nationals given that the Mets got swept by the Reds. Oy.

Thank you R.A. Dickey for pitching another one hitter.

And breaking some long-standing records too.

Afterward, manager Terry Collins compared him to "the Koufaxes and Seavers" of baseball lore. Dickey has not allowed an earned run over his last 42 2/3 innings, closing in on Dwight Gooden's franchise record of 49. He is the only pitcher in Major League history to submit five straight starts with no earned runs and at least eight strikeouts. Dickey became the third pitcher since 1945 to hurl back-to-back one-hitters, joining Sam McDowell (1966) and Dave Stieb (1988).

"Only God could script a narrative like this," Dickey said. "It's really incredible."

Dickey also called it "poetic," in part because Showalter was the Rangers' manager who, in no uncertain terms, told him seven years ago that the knuckleball was his last and only chance to revive a floundering career.

And to top it all off, from everything I can see, he is a thoughtful, humble, decent guy with a great sense of humor and a nice sense of his place in this universe. His journal posts from his trek up Kilamanjaro last summer were great. As a kid I loved watching Hoyt Wilhelm and the Niekros toss knucklers, as much because they were oddities as because they were pitching (add Steve Hamilton to that as well for different reasons). But watching Dickey is watching a very good pitcher who happens to throw a knuckler. It is a very different experience.

Jun 20, 2012 at 12:40am
Two more shut-outs shut-out and masterful performances by Dickey and Johan. With Chris Young's return the Mets putting together a decent starting staff that right now competes, IMO, with the best staffs in the NL. Kudos to Warthen!

Jun 20, 2012 at 12:50am
Although the bullpen last night over 3 innings in the form of Batista, Parnell and Rauch maintained the shutout and only combined for allowing one hit. Certainly not anemic for that game.

Although the bullpen last night over 3 innings in the form of Batista, Parnell and Rauch maintained the shutout and only combined for allowing one hit. Certainly not anemic for that game.

Actually we really need to when most of them enter for the save or the hold. I was holding my breath for each one of them last night.

Jun 20, 2012 at 2:53am
We need a catchy phrase for Dickey. It's a better story for me than Linsanity (while Dickey has hardly come out of nowhere he certainly has ascended to another plain).

Jun 20, 2012 at 3:46am
Yes Zoinks it was me. I may have called Mike F. who I rarely listen to and never try to call but was tempted to and amazingly got through about Diehl's DWI but when I have called in the past (and not too often these days) I usually try to call and get through on the weekend with Richard Near, Evan Roberts (sometimes with Beningo) and Ed Randall or Steve Sommer. Someone started a thread about hearing me a few years ago probably talking about the Mets or the crappy sightlines in Citifield before they put in the large screens for the upper deck
people.

Dickey's story is amazing. The whole playing in Korea decision he didn't make is written about in his book. He is a smart, funny, cool person from everything I've gathered about him.